Shredded Brussels sprouts with cranberries and walnuts are a super quick and easy side dish with great flavors! It’s perfect for the holidays or just a busy weeknight! 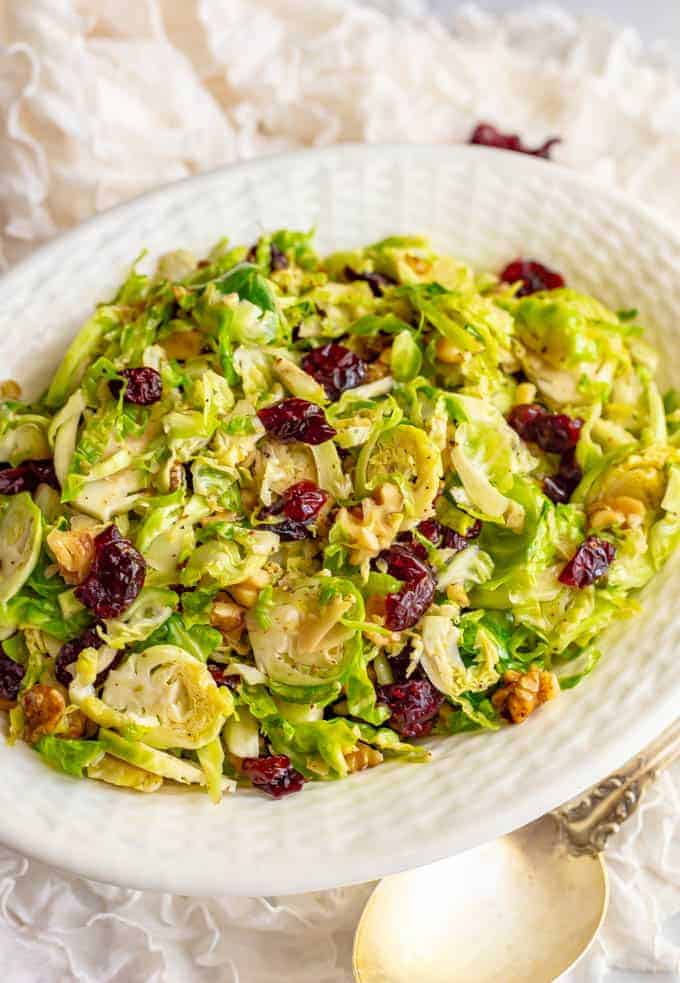 I was in New York City for the first part of the week and oh, how I have missed that city!

We went multiple times as a family when I was growing up and I went several times as a young adult. It’s always felt familiar to me.

It’s been years now though and it’s one of those cities that I just really long to see and be in. So I tagged along with my husband on his work trip and just crammed in as much NYC fun as I could!

We hit up the public library, the Museum of Modern Art, Central Park and plenty of great restaurants!

It was much too quick of a trip and I definitely want to go back soon and spend some more time there, but I’m so happy I got a little NYC fix!

(It’s also a Thanksgiving side dish staple for our family.)

Shredding the Brussels sprouts makes them more approachable, more tender, softened and less bitter. (And also a great option for younger kids cause they are easier to eat!)

It also makes them super quick and easy to cook!

This recipe is a prime example – it has just 5 minutes of cook time!

I also adore the flavors and texture in this quick and easy Brussels sprouts side dish. (Which, by the way, is Sunny Anderson’s recipe. And I have been making it for years and years.)

The crunchy walnuts and sweet dried cranberries add such great pops to the wilted Brussels sprouts.

And the ground nutmeg is the surprise ingredient. It adds a lot of depth and warmth to the dish – as well as a hint of something special, something holiday worthy. But don’t worry, it doesn’t overpower the Brussels sprouts.

Nutmeg is actually really good for pairing with big bold veggies like Brussels sprouts, as well as with hearty greens like collards and Swiss chard.

Not to mention the flavors and colors here make this a really pretty and festive dish! 💚❤️

And as I mentioned, this is our go-to Thanksgiving Brussels sprouts dish most years. It’s easy to prep everything ahead and then just cook it off at the last minute when you have some room on the stove.

The red and green and the warmth from the nutmeg make it a great fit for a Christmas side dish too!

Notes on shredded Brussels sprouts with cranberries and walnuts:

Tips on how to shred Brussels sprouts:

– Next, use a small, sharp knife, such as a pairing knife, and cut off the bottom brown hard core from each Brussel sprout.

– You’ll also want to peel off the outer surface leaves and discard those as well.

– Use a little triangle cut at the bottom of each sprout to remove part of the inner hard core (it’s light green/white).

– Use your knife and thinly slice the Brussels sprouts so that you have piles of shredded leaves. Now you are ready to go!

And like I said, the Brussels sprouts for this recipe can be prepped ahead. Just store them in a ziptop bag or a covered container in the refrigerator until you’re ready to make them.

If you are on the fence about Brussels sprouts, or if you’re a serious lover like I am now, I hope you’ll give this recipe a try!

P.S. Looking for some more shredded Brussels sprouts recipes? Check these out:

You really need to thinly slice the Brussels sprouts here to get the most out of this recipe. And it also really helps to take the time to remove the hard core from each one. I use a little triangle cut to get it out. Then you’re left with just the leaves and that’s what you want for this.

I’m not a fan of the store-bought pre-shredded Brussels sprouts for this dish. They are usually sliced too big and have too much of the core in them to work well here.

The recipe calls for walnuts but you could also use pecans.

It’s not part of the recipe but I’ve sprinkled a little Parmesan cheese over this before and that was delicious as well!