Bourbon bacon jam is a salty-sweet spread with big bacon flavor that’s perfect for an appetizer with some cheese and crackers or on burgers or sandwiches or in salad dressings or soups! 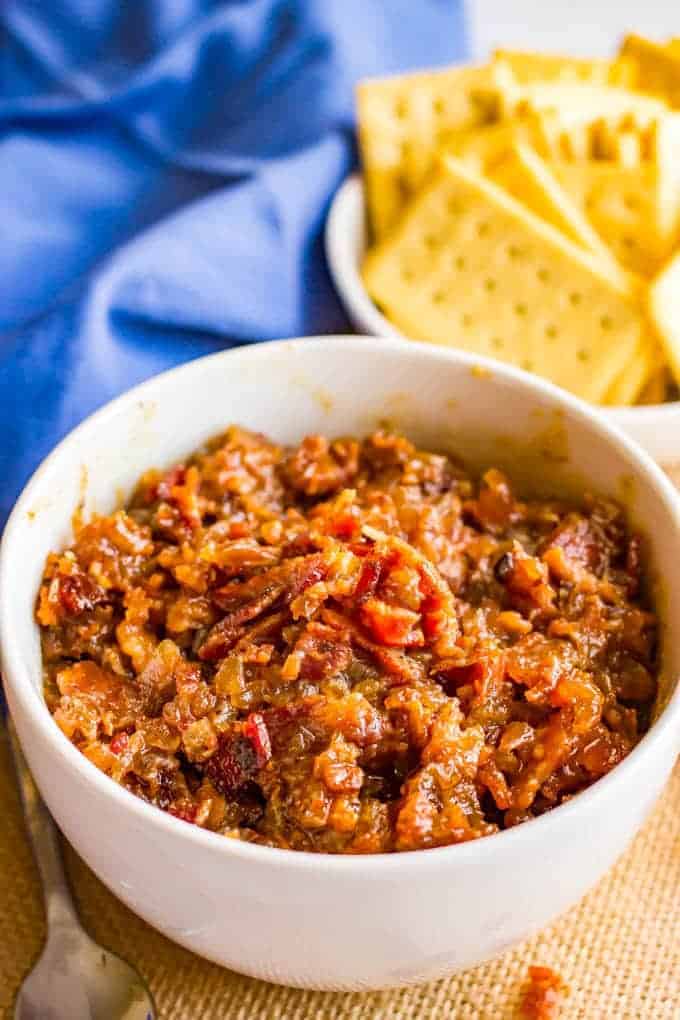 It’s been a strange week of ups and downs.

Got some good news (J was evaluated for speech therapy and found to be A-OK and right on track for a 3-year-old), some bad news (a close family member is sick), had 3x as much work going on at my day job but also had a fun girls night out with some other mamas at J’s preschool, have half of my house packed into the other half of my house (hardwood floors being refinished this weekend), and hubby and I are packing up for a little weekend getaway, just us.

(We’re headed to D.C. to visit some friends and I’m SO excited!)

But needless to say, I’m a little out of sorts and you know what? That kinda goes with today’s recipe.

This is a little different than my normal healthy, easy family food fare, but you guys, I have literally had this bourbon bacon jam on my “to make” list for AGES. 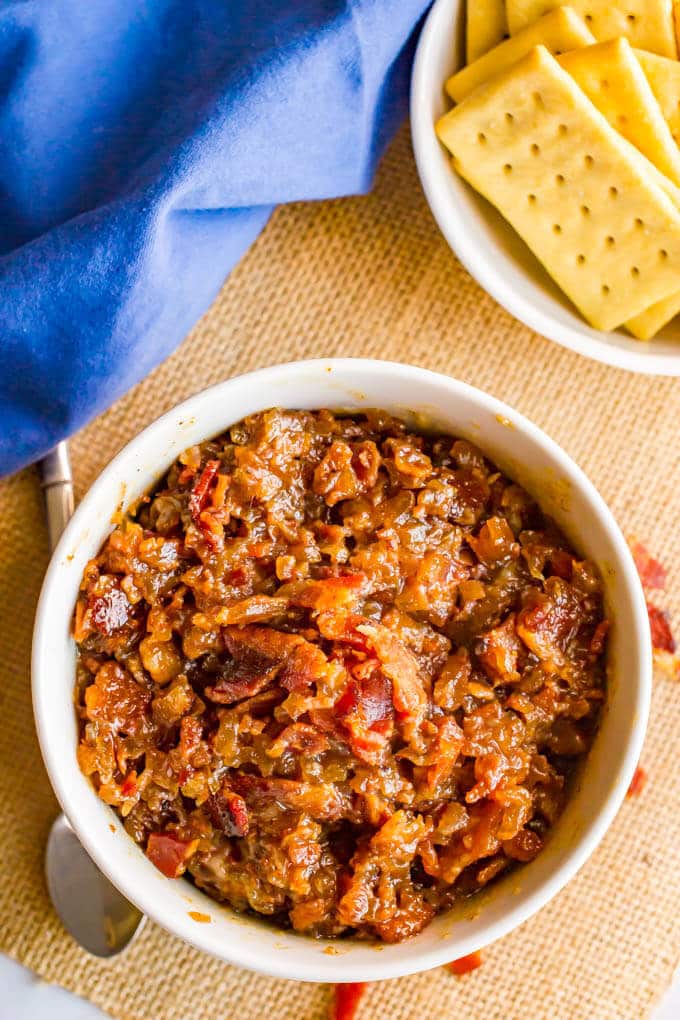 Seriously, I have a post-it note that I move in my planner from week to week of things I need to make beyond our regular dinners. Like, if we’re almost out of whole wheat pumpkin muffins or spinach banana mini-muffins for the kids, I’ll write that down.  Or if I need to do another double batch of my easy whole wheat cinnamon raisin bread for the kids’ breakfast, that’ll go on the list.

Other times, I’ll have a recipe I’m just dying to test and it’ll go on the list so I don’t forget. My memory these days is the WORST!

(And y’all know it’s not because I didn’t have any bourbon in the house! #bourbonlover 🥃) 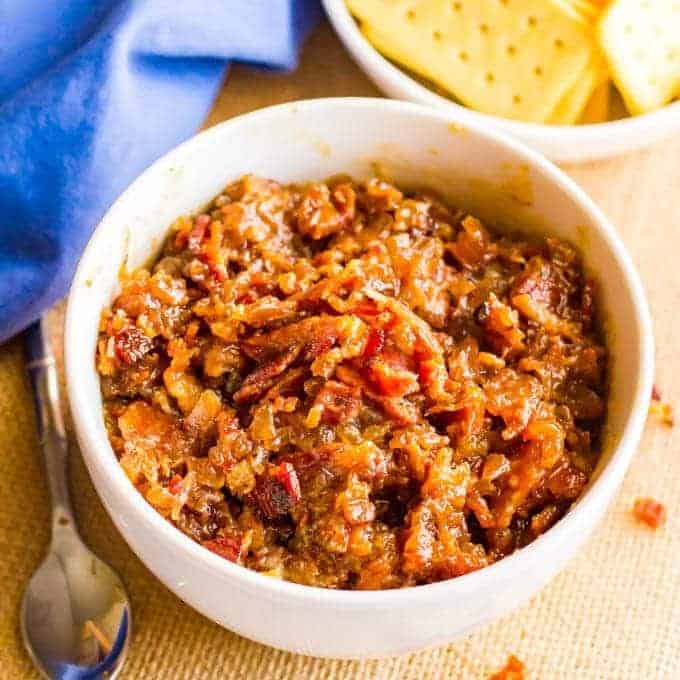 Poor bourbon bacon jam, I’m sorry I ignored you for so long.

But you were worth the wait and then some! 😍

This bacon jam has such a deep, smoky flavor, a nice hint of sweetness (hence the jam) that’s balanced by the acids. And my version gets some serious background flavor from the bourbon, Dijon mustard and Worcestershire sauce. Seriously delicious friends! 🙌 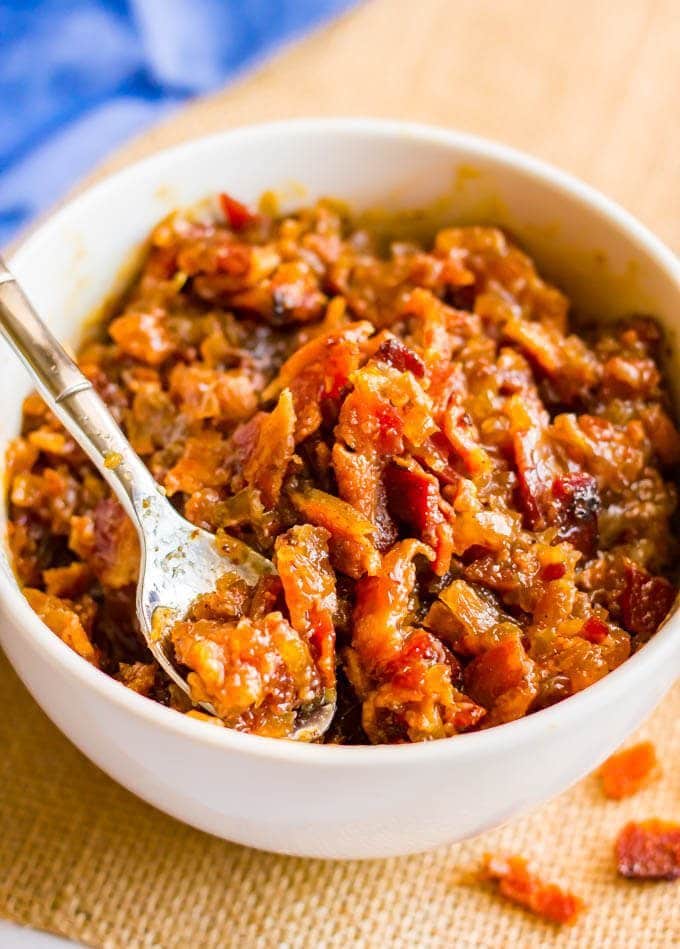 – Spoon it on top of some burgers or even grilled chicken.

– Serve on its own with crackers or a baguette or pair with cheese — and pimiento cheese for an extra decadent, Southern twist!(Or combine both of those and serve it on top of my easy pimiento cheese crackers!)

– Also would be yummy with slow roasted cherry tomatoes on a baguette for a massively flavorful crostini bite.

– You could also spoon this on top of my easy microwave baked brie. 👍

– I love bacon and sweet potatoes together, and I think I’m gonna have to try this on my sweet potato toast. Breakfast deliciousness!

– It would also be good as part of a dressing for a spinach salad, part of a turkey sandwich or grilled cheese, with poached or fried eggs and an English muffin, as a garnish for soup, with pasta and sauce, and on and on.

So put this on your list and do better than me and actually make it before 3 more months go by.

In fact, it’d be great for all the March Madness games coming up! Perfect guy food for a crowd and for game watching. 👍

Have a wonderful weekend and happy cooking!

If you want your bacon jam to be smoother, you can transfer the cooled mixture to a food processor and pulse it until it’s more combined. I happen to like the bigger bacon chunks in mine.

Bacon jam will keep stored in the refrigerator for up to a month.